A report from 2016 shared a bothering for publishers and advertisers data that 309 million smartphone users block ads on the mobile web. Moreover, technologies development has gone further as ads can now be blocked not only in browsers but also inside mobile applications.

Another report per country and device depicted that the most committed to ad-blockers users on mobile live in Asia-Pacific – 94%. Regarding desktop, the leading country is North America, where 68% of users surf the internet with switched on ad-blockers. 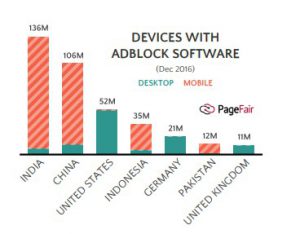 Content filtering tools, such as AdBlock, Adblock Plus, uBlock Origin can be added to the majority of the top browsers, like Google Chrome, Apple Safari, Firefox, Opera and others. Other external software programs able to catch not only advertising but also malicious and offensive content, filter it and only after display to the user.

So, Ad-blockers are nightmares for publishers and app-developers, as ads are their main channel of income. Some people even compare users, who avoid viewing ads with thefts, who steal publishers’ content. “Free” mobile apps and websites are created and given to people with the hope that ads posted on them would bring enough revenues to maintain growth and development of the content. The invasion of users with switched on ad-blockers will make websites and apps suffer from material losses, which will probably end up with lower salaries for their writers, editors, designers. This will lead to the content quality deterioration which will affect all the visitors of these websites and apps as they consume this low-quality content. This means that ad-blockers users literally “bite the hand that feeds them..”

How to cope with the problem?

1. Get the ad-blockers in on the deal?

Tech giants, like Google, Microsoft and Amazon seem to find a way out from the ad-blockers problem. They are ready to pay “30% of additional ad revenues” to push their ads through to the most popular ad-blocking browser Adblock Plus, which has more than 300 million downloads. So, large companies can pay to make their ads be whitelisted and displayed to Adblock Plus users, the only thing they need is to correspond to ad-blocker acceptable ads criteria.

Under the motto “to make the user a part of the entire process” Ukrainian developers offer to test a new service, which promises to pay a percentage of advertiser revenue to the user. Service, named Octogin monitor user activity while he/she surfs the internet, identifying the entered websites and seen ads. All the views are calculated and the user receives a remuneration in internal currency – O Coin. The money can be spent on charity, on project sponsors products or exchanged. The test will include only 5000 users and after successful trial will begin as a fully working project. The only condition for the user to accept the offer is to stop using ad-blockers.

3. Offer a compromise to the users?

Some of the websites have implemented tolerant measures versus ad-blockers. When detecting visitors with switched on ad-blockers they politely ask users to turn them off.  Such as, Forbes is using pop-up messages, that met ad-blockers users entered the site and ask them to disable their blockers and in return they will be offered the access to a lighter advertising content of Forbes website.

According to Lewis D Vorking, Forbes Media chief product officer, conversion of people who turned off the blockers in proportion to all the website visitors reached 40%. But was it enough in terms of earned ad revenues? Maybe it is the time to..

While Forbes kindly asks to switch off the ad blockers, French news websites, including Le Monde, L’Equipe, and Le Parisien force the users to cut their ad-blockers to be able to access the website content. The editor-in-chief of French daily Le Monde explained such severe policy by saying that Journalism must be paid to maintain its high-quality and reliability of content, and for this reason website “must be able to rely on advertising revenue”. Fair enough?

Would you like to find out more about influencer marketing possibilities? Check out our article..

Another alternative ad format that can be offered by Khing, which is blind for ad-blockers, is Native Ads. The purpose of the native ad is to make the ad consumer experience be more organic when he/she runs into the ad. An advertising message is integrated into the website or the app so naturally, that user perceives it as a part of the placement. In terms of users engagement, native advertising also shows great results. Such as, it was spotted that 70% of users preferred to find out about the product through the website or game content, moreover users tend to spend almost the same time that they spend on the editorial content of the native ads. In addition to this, native ads help to raise the brand awareness by 82%.

It is quite naive to think that ads can disappear due to ad-blockers or something else. One of the reasons is that globally digital advertising brings nearly 500 billion in revenues. Smart publishers will create new channels for ads to reach people and make their profits, ads will become more complicated – it will be harder not only to block them but even to identify them. Soon, it will probably be impossible to find a post on the internet, which was created without someone’s commercial interest.